It was a year ago, March 26th, 2017. I had booked my flight for Fairbanks, Alaska to try and see the northern lights, but that was next weekend and I was feeling extremely motivated about travel and couldn’t wait to start. So I decided to do a weekend day trip to Kelso Dunes, which are these large sand dunes in the middle of the Mojave Desert here in California, known for producing a phenomenon called singing sand. It was a 4 hour drive from me so I picked up 2 liters of water, a couple pre-packaged salads and a bag of hot wings for food, and set off on the drive.

I hate long solo drives so I don’t remember much of the drive, aside from being scared of running out of fuel between the increasingly sparse rest stops/gas stations. Oh and I remember being surprised at how green parts of the desert, the aftermath of a really rainy period here in Southern California.

I finally arrived at the dunes around mid day, they were not quite what I expected at first. I had looked up pictures of the dunes before going and I had expectations of endless sand as far as the eye could see and dunes for miles. But I quickly realized the photos I saw mostly hid the mountains, greenery, and the small gravel road leading to the dunes. 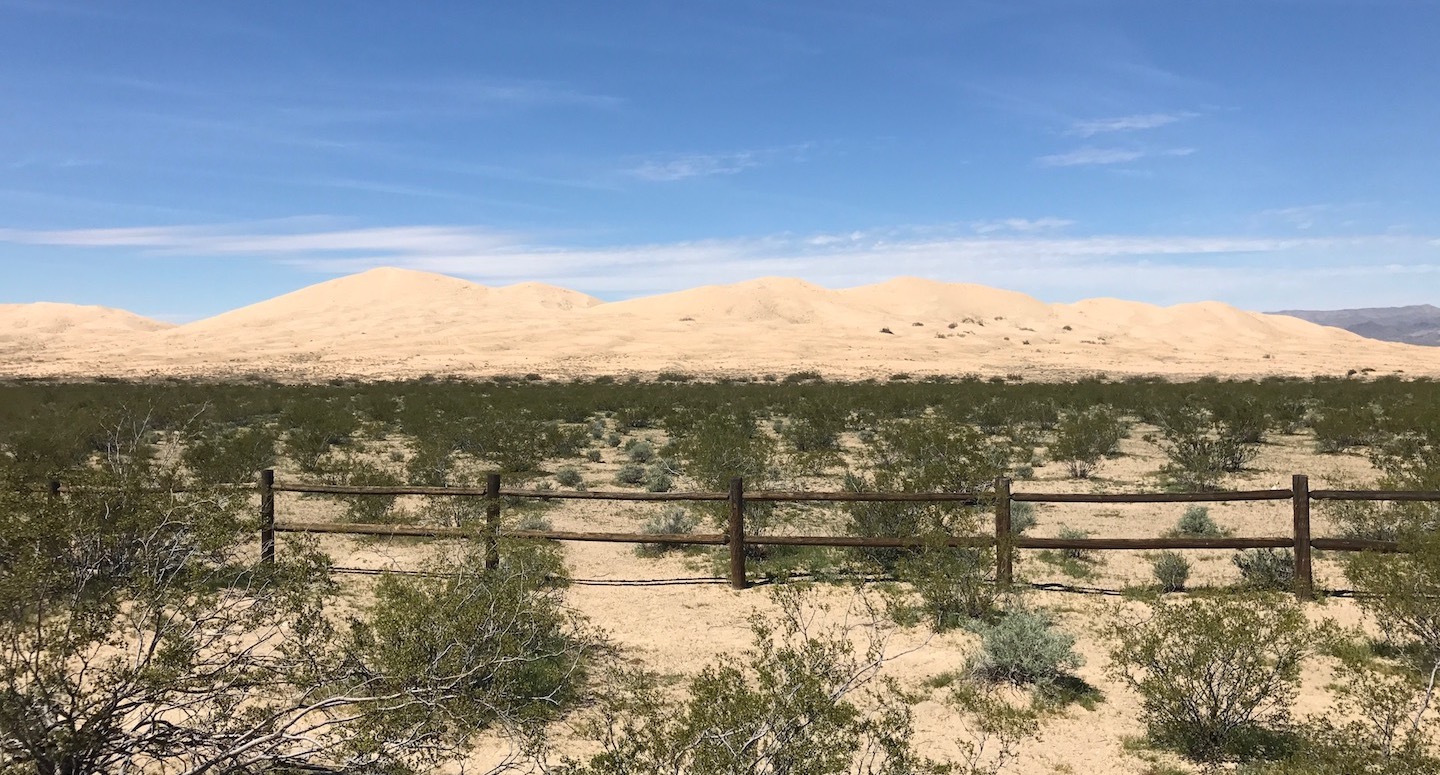 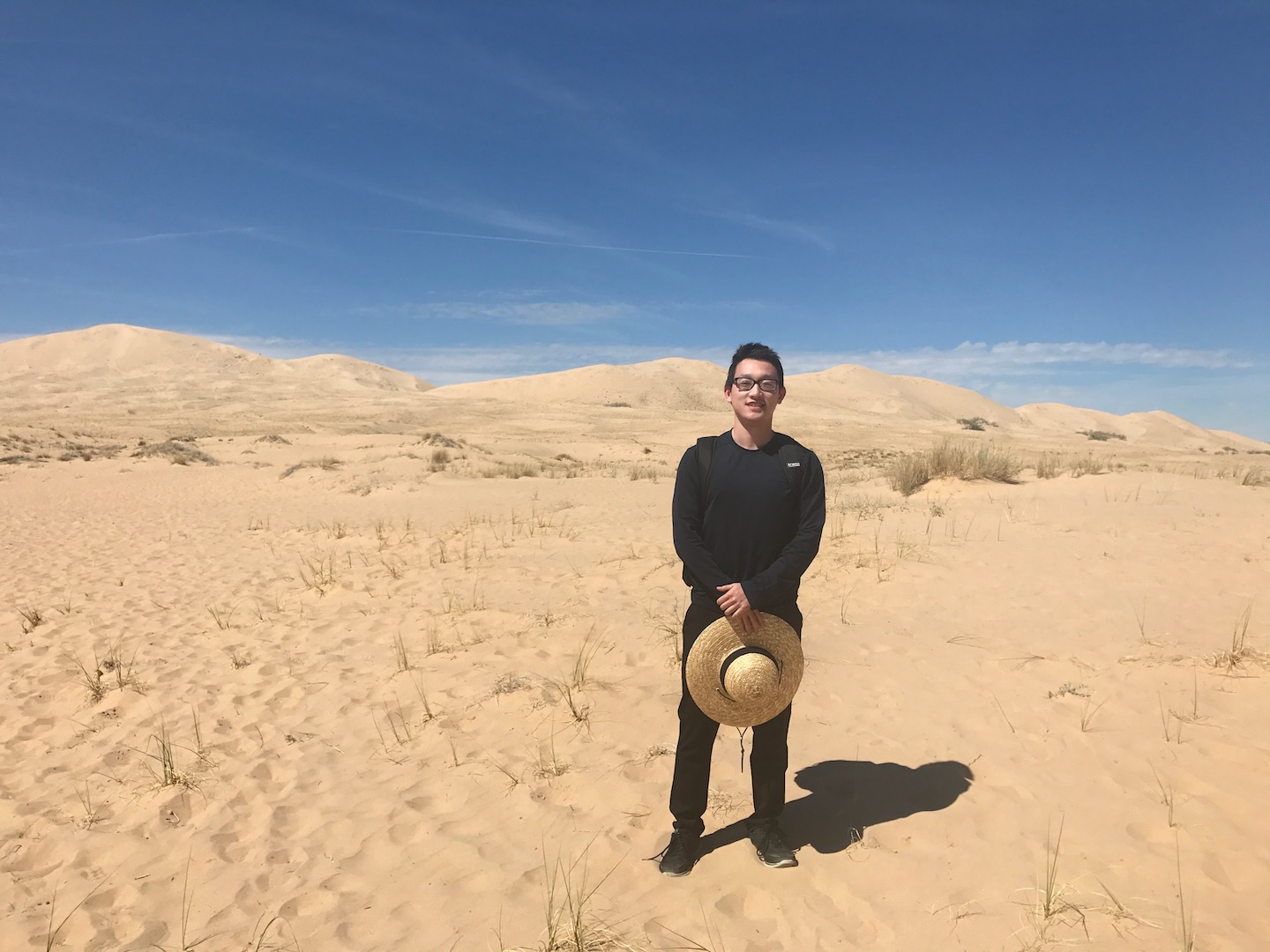 It was about a half mile hike to the base of the largest dune and when I got there I was feeling fine, not tired at all. I thought I would just get to the top of the highest dune, hang out at the peak for a bit, come down and go home. But as I started my ascent up the dune and the slopes got steeper, I realized how difficult this was going to be.

The sand was extremely fine and for each step I took up the dune, I slid down 3 steps. It felt like I was on an incline treadmill, I was moving my legs but getting nowhere. Halfway up the dune (only about 300 feet up) and I was heaving and exhausted. I sat sideways on the dune so I wouldn’t slide down to take a break. I thought I was in decent shape but this was a humbling experience. 5 minutes later I started up again, trying different strategies. I tried spider crawling with my arms and legs, scrambling up in quick bursts, and going diagonally and making a zig zag up the dune. Spider crawling just ended up getting sand in my face, and going diagonally just made me sink backwards more which erased most of my upward gains. Scrambling up in quick bursts was the most ‘successful’ strategy for me but also the most exhausting. 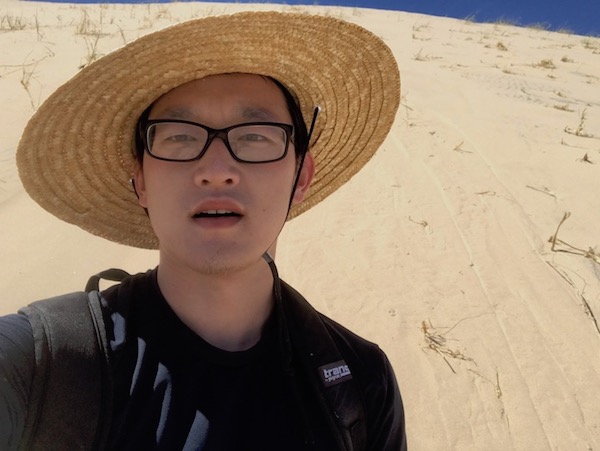 Eventually I made it up the 650ft (200m) dune… and at the time it was the hardest hike I’d ever done in my life. I was hoping to be able to take a break, enjoy the views for a while before heading down, however I was wrong there too. As soon as I reached the top I understood how these sand dunes got here in the first place. The wind was constantly blowing, depositing more sand onto the dune from the surrounding mountains, which grows the dune, but makes resting at the top difficult because sand is constantly being blown in your face. 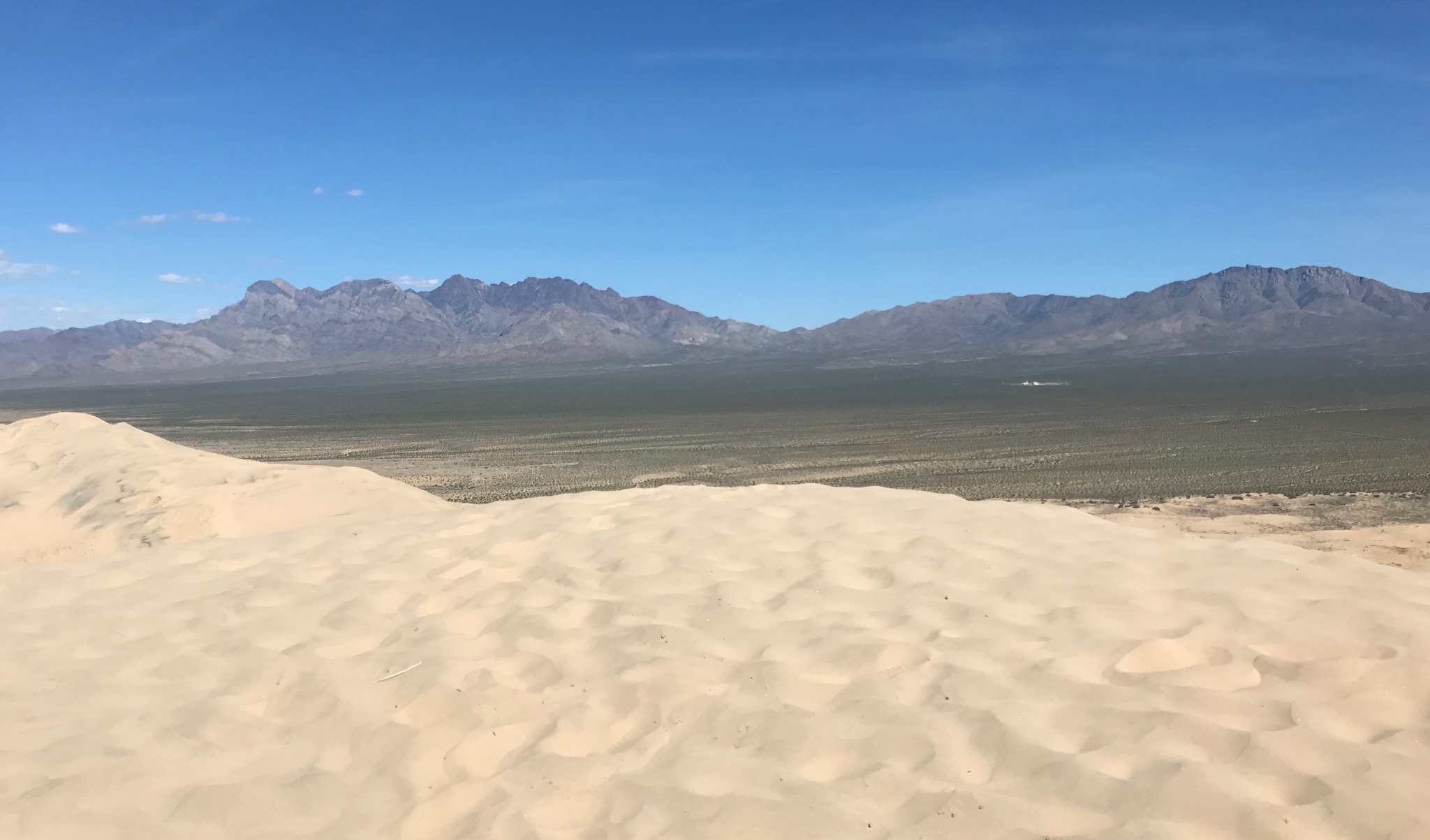 After a short break at the top and some rough photos, I made my way down the dune, a much more enjoyable experience. The sand was so fine that it resembled a liquid and each step I took down looked like treading through some kind of syrup. I also heard the ‘Singing Sand’ phenomenon! Which is a low vibrating sound that is emitted from certain sand dunes with just the right properties/conditions, and is caused by the sand being stirred up by wind or by someone walking over them.

Eventually I got to my car and immediately sank into the seat. I wolfed down my salads which were now warm and mushy, dumped about 2 cups of sand out from my shoes, and started the long drive back, equally exhausted and exhilarated by the experience. 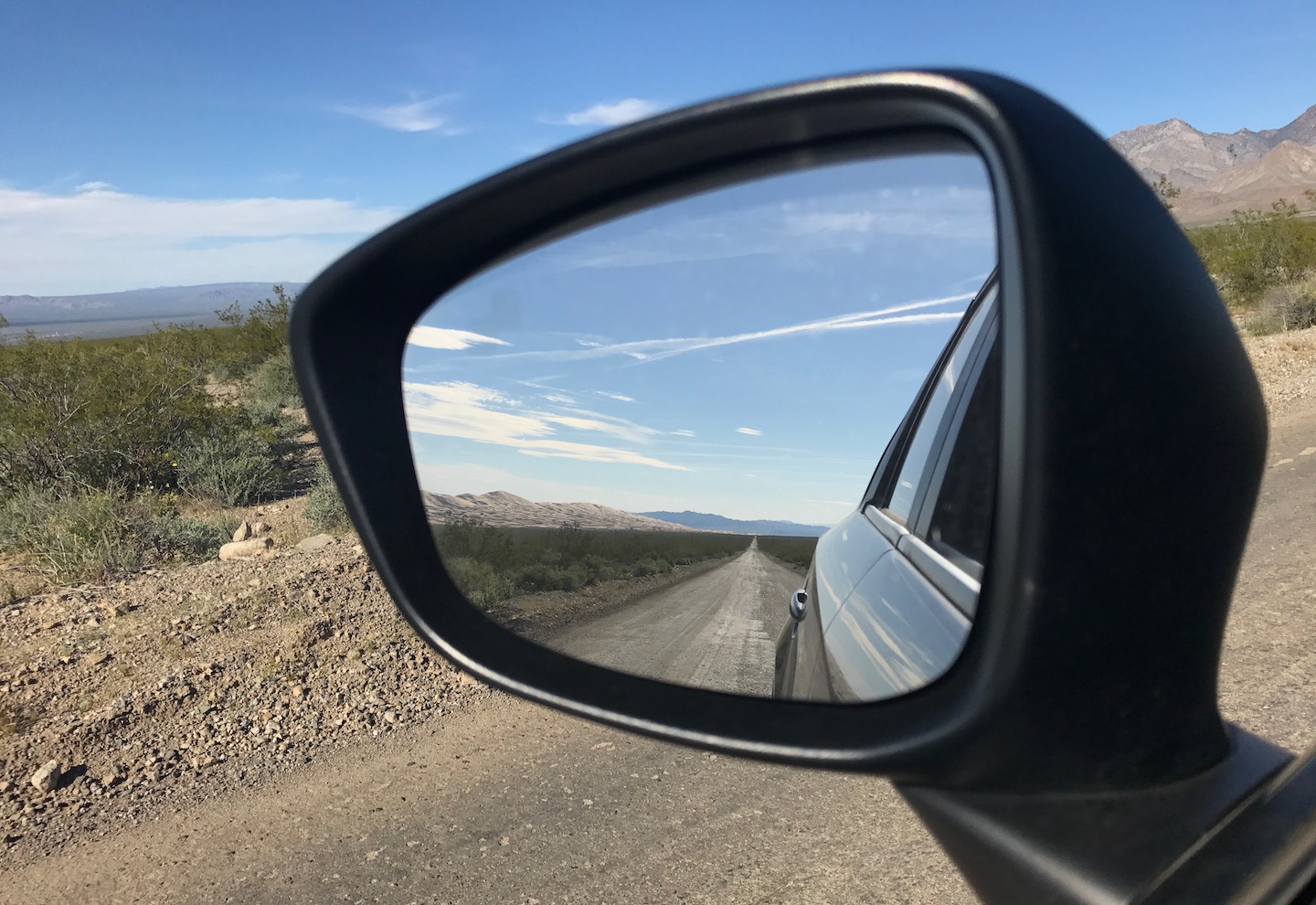 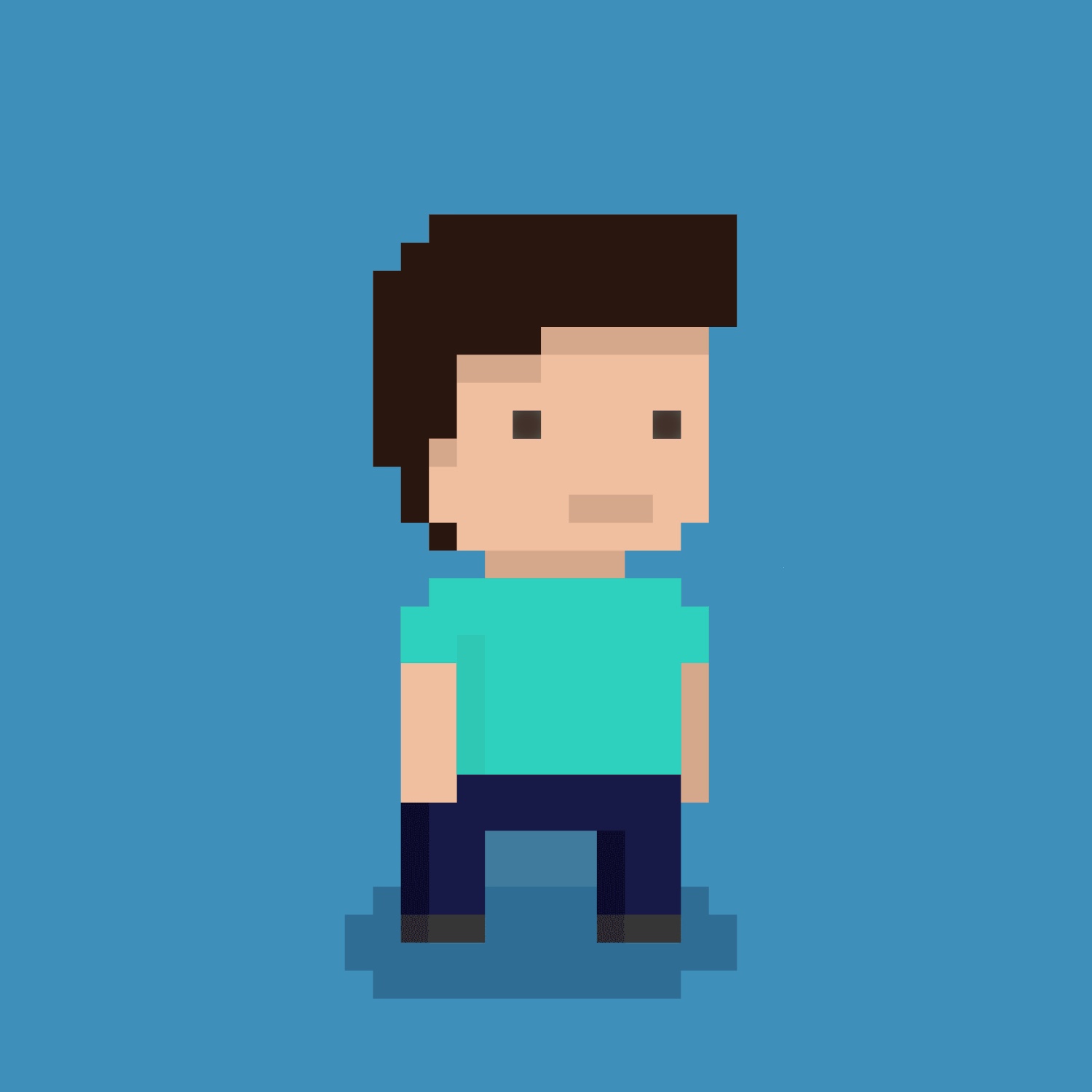